top of page
This site was designed with the
.com
website builder. Create your website today.Start Now

Meet the Cast of The Shickles

I am so excited to have almost a full cast assembled for The Shickles. Not only do each of these wonderful actors completely embody the heart and soul of the characters I imagined, they bring their own sensibilities to the table bringing these characters to life in ways I could have never conceived of on my own. I have to keep pinching myself that I actually get to work and play with these folks.

Cast in the role of Jason Shickles is ZACH ALDEN. Jason is the heart of the film. He's a loveable single dad with a 15 year old daughter, Grace, whom he adores more than anything in the world. Jason wears his heart on his sleave, so I needed an actor who exuded a natural charm and warmth. Zach fits the bill perfectly.

I honestly could not be more excited to be working Zach. Not only is he a ridiculously funny, sexy, smart gifted actor, he's a big loveable goofy bubbly, bright shining light of an awesome human being. Plus he's a dad to his 8 year old daughter in "real" life. He's quickly become my new best friend and collaborator on this project. Check out Zach and his adorable offspring in the this fun short called SHOOT THE HOSTAGE.

When I first reached out to Zach, I asked him if he knew of any actresses that could play the role of Margot Shickles, by far the most challenging role in the script. Zach sent me a link to a short film called IF WE WERE ADULTS, starring himself and a young woman named SUZIEY BLOCK, and I was blown away. The short itself is really great (written and directed by Michael Fitzgerald), but the performances are amazing. The minute I saw Suziey on screen, I knew she was Margot.

Suziey recently won a best actress award at the L.A. Comedy Festival for her work on IF WE WERE ADULTS, which is currently being developed into a television series.

Check out the short LIFERS (also written and directed by Michael Fitzgerald) starring Suziey and Zach.

Both Suziey and Zach's work can also be seen on the If We Were Adults Youtube channel. https://www.youtube.com/user/IfWeWereAdults

If Jason is the heart of the film, his 15 year old daughter, Grace, is the soul, and there is no one who embodies that soul better than ZOE LILLIAN. Zoe is one of the most gifted young actresses I have ever met. Watching her bring the character of Grace alive has been so satisfying. I could probably watch Zoe fold socks for hours and be rivited the entire time.

It's pretty interesting as a writer to create a fictional character and to later learn that that person actually exists, as if you were writing with them in mind all along. This is what is was like when I first met the otherworldly, TERESA GANZEL. Teresa is cast as Ohara Shickles, the family matriarch, and it's simply impossible not to fall instantly in love her.

Teresa's credits and career are long and impressive. You might remember her as the ditzi blonde from the Richard Pryer movie THE TOY with Jackie Gleason. She was a regular on The Johnny Carson Show and made appearances on such classic hits as Three's Company, The Newhart Show, and Married with Children. She's also had an illustrious career as a voice over/character actress with a long list of credits to her name. She's provided voices for Toy Story3, Up, Monsters, Inc., Wall E, and Rugrats, just to name a few.

JOHNPAUL OUVRIER is cast as the Kevin Shickles, the family Patriarch. JohnPaul had us all in stitches with his pitch perfect interpretation of Kevin. Goofy, funny, unapologetically inappropriate, warm-hearted, silly, strong... JohnPaul captures it all.

D.C. DOUGLAS is set in the role of Barry, Margot's husband. Barry is the most mysterious character in the film. On the surface he seems 'put-upon' to say the least, but he has a secret life behind closed doors. I needed an extremely gifted, veratile actor who could truthfully embody the extremes of Barry, and D.C. is that plus so much more.

D.C. is the consummate "working actor" with a list of credits a mile long. He's been seen on 2 BROKE GIRLS (a show produced by my old boss, the amazing Michelle Nader), WORKAHOLICS, NCIS, HOT IN CLEVELAND. He's also been a regular on the YOUNG AND THE RESTLESS, DAYS OF OUR LIVES, THE BOLD AND THE BEAUTIFUL, and has done extensive voice-over/character work on shows such as FAMILY GUY. Check out D.C.'s website

JUSTIN PRESTON is set in the role of 16 year old Michael. I had something very specific in mind as I was creating the character of Michael and then I met Justin and that all changed, for the better.

I found Justin after sifting through hundreds of reel submissions online. His stood out like a diamond in the rough. He's a softspoken actor with an incredible presence on screen that just draws you into his world. He took the essence of the fictional character I had written and completely turned him into a real person. He's funny, sweet, talented and undeniably handsome. I am honored to have the opportunity to work with such a young burgeoning star such as Justin.

BRANDY MCKAY will be playing the role of Annie, Jason's love interest. This part turned out to be the most challenging to cast. After looking through almost 3000 submissions and auditioning about 30 women, Brandy was clearly Annie.

Brandy and I have actually known each other for years and I have always wanted to work with her. She is by FAR the funniest and most talented improvisational actresses I have met and I couldn't be more thrilled to have her as part of our cast.

WILLIAM KNIGHT will be playing the role of Mr. Baumgardner, the crotchety old man who sends Jason on an unexpected journey. William is anything but crotchety. He's a wonderful, warmhearted and incredibly versitile actor. He's a true professional in every sense of the word. There's very good reason why this man has been a successful character actor with credits that go back as far as 1957. He's amazing!

Meet the Cast of The Shickles

Suziey Block named as a "Hottie to Crave" at the Palm Beach International Film Festival. 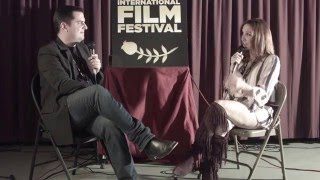 Interview with Marco Neves and The Shickles Director, Donna Trousdale.

THE SHICKLES IS CHOSEN AS AN OFFICIAL SELECTION OF THE SOUTH BAY FILM & MUSIC FESTIVAL!

World Premiere of The Shickles

THE SHICKLES: OFFICIAL SELECTION OF THE PASADENA INTERNATIONAL FILM FESTIVAL!